Nissan Commercial Vehicles is, you guessed it, the commercial branch of Nissan. They manufacture a series of fantastic work vehicles that you’ve undoubtedly seen all over town–as soon as you know what one looks like, you can’t stop seeing it. I had the pleasure of working with a small team from Critical Mass to redesign the site and introduce a lot of new campaigns to showcase how Nissan was making an excellent work vehicle.

The site was run on a Grails back-end, and we utilized a number of different technologies on the front-end. There are a few parts of the site that use Backbone to create a more robust web app experience, and the rest of it is just good old GSPs, Javascript and SASS. I came on to the account in 2013 during a period of major transition. One of the original team members built a framework that was running a lot of the front-end logic on the site. While ambitious, his framework definitely left some things to be desired that could be fixed by refactoring a good chunk of the code and utilizing modern tools. In the time that I was there we implemented a stronger SASS organizational structure, dependency management using Require.js, a component structure utilizing Flight.js, the start of a decent Gulp workflow, and the aforementioned Backbone conversion.

We facilitated a pretty major overhaul of the look and feel of the site in the few years that I was on the account. The brand still retained the grittiness that’s expected of most commercially-oriented sites, but it definitely refined itself over time. 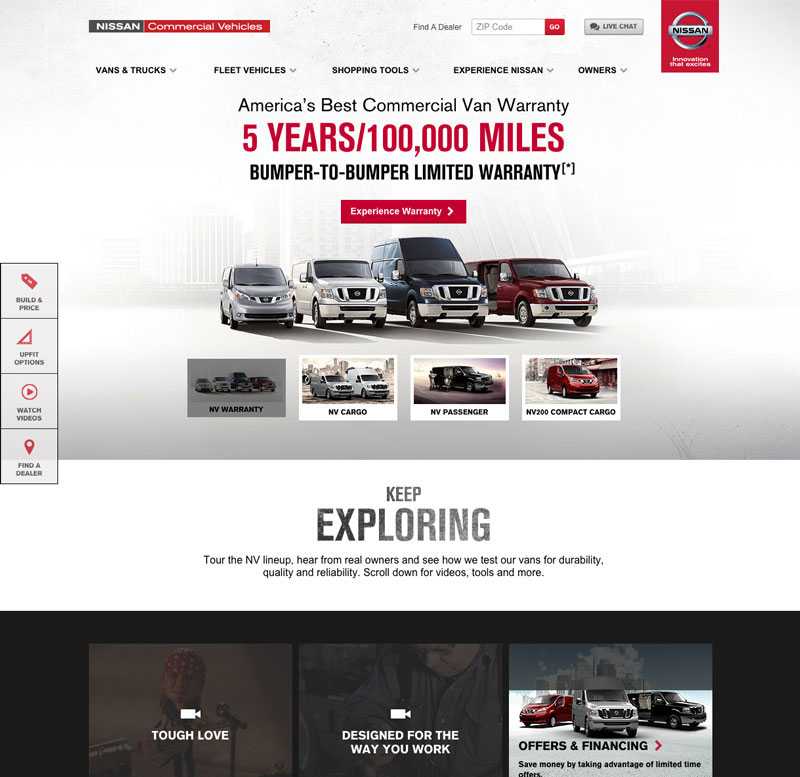 Screenshots can only do so much–to fully experience the site, you should definitely go and check it out at nissancommericalvehicles.com. Some of the pages that I had the most involvement with are the home page, the vehicle landing pages for the NV Cargo, the NV Passenger, and the NV200 Compact Cargo, and the launch of the NV200 Taxi for its maiden voyage in NYC.